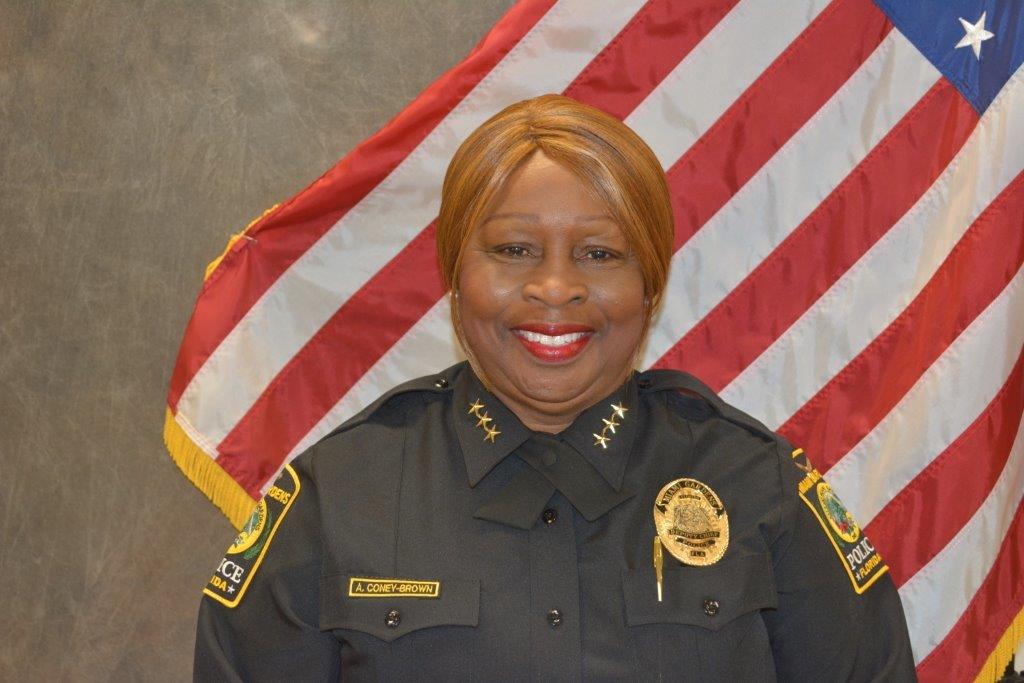 Deputy Chief Audrey Coney-Brown has been a vital member of the law enforcement community for 46 years. She is a native of Miami, Florida and lived in numerous inner-city communities in Miami Dade County, i.e. Coconut Grove, Overtown, Liberty City, Brownsville and has resided in the City of Miami Gardens since 1980.  Deputy Chief Coney-Brown was raised and nurtured by a single mother along with her seven other siblings. Deputy Chief Coney-Brown attained her high school diploma at Miami Northwestern Senior High School in 1973. After graduating high school, she received her Associates of Arts Degree from Miami-Dade Community College.

Deputy Chief Coney-Brown began her law enforcement career in 1975 with the City of Miami Police Department. She served in the Office of the Chief of Police as a Secretary for five years. In 1980, she took the oath to become a police officer. She served her community faithfully for numerous years. In 1989, she was promoted to the position of Sergeant. As a sergeant, she led the following units: Communications, Health Services, Background Investigations and Operations. In March 2007, she retired from the City of Miami Police Dept. after serving for 32 years.

In June 2007, Deputy Chief Coney-Brown joined the Miami Gardens Police Dept.  As a sergeant with the Miami Gardens Police, Deputy Chief Coney-Brown was tasked with the responsibility of building the police department by conducting the background investigations of 150 sworn and civilian personnel. Additionally, she supervised the Internal Affairs Unit, Communications, Community Relations, Fleet, School Crossing Guards, Chaplain Program and was very instrumental in developing the Citizens on Patrol Program. In 2013, Deputy Chief Coney-Brown was promoted to the position of Captain and was charged with overseeing the Support Services Division. In 2014, she was promoted to the position of Major and managed approximately 45 employees within the Investigations Division.  In 2016, she managed the Administrative Support Division overseeing approximately 50 employees. On several occasions, she has been given the opportunity to serve as the Acting Chief of Police as well as the Acting Assistant Chief of Police.  In April 2021 she was promoted to the position of Deputy Chief of Police assigned to the Operations Division.

She describes herself as possessing the highest level of integrity, commitment, loyalty and trustworthiness.  She exemplifies admirable leadership and administrative skills and performs her duties in the spirit of excellence.  She is proud and honored to serve under the leadership of Chief Delma Noel-Pratt.  Deputy Chief Coney-Brown serves her community with distinction and pride.  She is the first African American female to hold the positions of Sergeant, Captain, Major and Deputy Chief with the Miami Gardens Police Department.

Favorite scripture: “Trust in the Lord with all thine heart and lean not unto thine own understanding, in all thy ways acknowledge Him, and He shall direct thy paths.”  Proverbs: 3: 5 & 6